Empire is the home of the

Eight Ball Association of South Australia and has 18 teams playing in the EBASA Super League Division.

9 Ball SA Inc. and has 12 teams playing in the South Australian Vegas League

The Winning & Runner Up teams competing in the American National Titles, Las Vegas.

Contact us if you are interested in playing any night of the week or entering a team with some mates – our leagues cater for all skill levels from beginner /social to advanced. 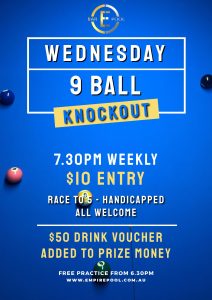